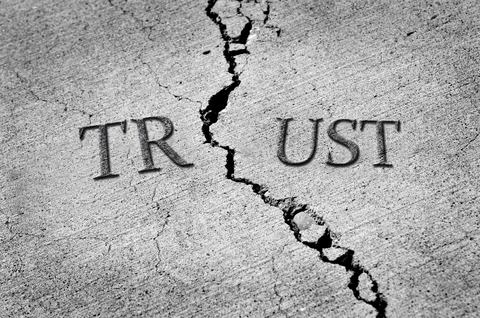 How many times in our life have we heard these statements; “I trust you” or “I don’t trust you’’. These statements are so powerful that one statement could truly empower someone and one statement has the potential of destroying someone’s confidence and self-esteem. Guess which one?

For confidentiality reasons, we will call him Mark.

Mark was an executive working for a top tier financial services firm. He was working for this firm for over 10 years. He was well appreciated by all and even seen as possibly as the next CEO. One day his current leader gave Mark the task to work on an important project. Like always Marc took on the task with a positive mindset and worked hard to complete it on time. While working on this project, Mark felt he needed to isolate himself to really stay focused and that is what he did. Once the project completed he called his leader to let them know it was done, his leader was very happy, mentioned to Mark to print a few copies and to bring it to their next board meeting.

The day the world changed for Mark

Mark and his leader arrived in the board room, all the board members were their, everyone was handed a copy of the presentation and everything seemed totally fine. Everything was fine until they realized that the financial information on the slides were incorrect. Mark’s leader was furious but held his emotions and comments until they were alone. When the meeting was adjourned, the leader took Mark aside and let him have it. What did he tell Mark? This is unacceptable and I can’t trust you anymore!

Let’s take a step back and let’s chat about Mark. Mark was working for this firm for over 10 years, he was appreciated by all and was considered an A player. But in a few seconds Mark’s world was destroyed. After that moment, Mark lost total confidence in himself and started questioning everything about himself; maybe I’m not that smart, maybe I’m not executive material. That questioning was so painful for him that he resigned.

So, who lost in this situation?

Everyone lost, the firm he was working for lost because they just lost a great A player and Mark lost also because he truly loved working for that firm.

How do we avoid facing this same situation?

To avoid facing this situation, you need to understand the four elements of trust.

The first element of trust is competency. When facing a difficult or challenging situation with a business partner or team member ask yourself the following question;

In Mark’s situation, it was not a question of competency because his leader knew that Mark was fully competent to do the job

The second element of trust is reliability. To evaluate someone’s reliability ask yourself these questions;

In Mark’s situation, it was not a question of reliability because his leader knew that the job would be done on time

The third element of trust is motive. To understand someone’s motive ask yourself these questions;

In Mark’s situation, it was not a question of motive because his leader knows Mark well and knows that Mark takes his job and tasks at heart.

The last element of trust is openness-quality of communication. To evaluate this last element, ask yourself these questions;

In Mark’s situation, this was the element that his leader was really questioning. The leader was frustrated, because he felt that Mark should of done a few spot checks with him while he was completing his presentation and maybe he could of caught the error. He also felt that if Mark didn’t isolate himself and instead asked for feedback while working on his project, errors could have been avoided.

So, what did Mark’s leader do?

He said the statement he should not have said; I don’t trust you!

If Mark’s leader had the opportunity to go back in time, with this new knowledge on trust, how should he handle this situation?

First, he should make Mark understand that he totally trusts his competency, reliability and motives. By telling him this, he is still making Mark feel good about himself after this devastating event. This is important because Mark is considered an A player and A players do make mistakes. One thing is for sure, we don’t want to lose an A player.

Secondly, he should mention to Mark that the element he is questioning is his openness and quality of communication. His leader needs to come well prepared with questions and concrete observations to address this issue.

And that is how he should handle it. Make Mark feel important and gave him great feedback to help him improve.

So instead of destroying someone’s confidence and self esteem, take the time to really learn these four elements of trust and make your coaching conversations truly positively impactful.

Scroll back to top