With the holiday season fast approaching, this is also the time we start asking ourselves what great impactful gift should I get these individuals who I serve and who I love. Just the reflection on what to get all these individuals may become fun and at the same time it could become frustrating. We need to ask ourselves; what are we trying to accomplish with this gift? Are we getting them a gift because this has become an obligation? Are we getting them a gift to show them how much we care?

Regardless what the answers to these questions are, one of the important questions to ask ourselves is: Will this gift have such a tremendous impact that they will feel empowered?

Does such a gift exist?

What price am I ready to pay for this type of crazy gift?

The reality is that this type of gift is worth a truck full of gold to the person receiving it with little cost of purchase to you.

‘’ A PUF is about taking some time to focus and reflect on the positive behaviours that this individual (husband, wife, child, sister, brother, friend, co-worker, etc.) has demonstrated throughout the year and that has made a huge impact on the well being of your team, your family, your organization or even your community.

Please don’t confuse ‘’on the spot feedback” with a PUF. ‘’On the spot feedback”” is essential and au contraire, it should be done all the time because people need to get positive and constructive feedback or radical candor as soon as you have witnessed a behavior that needs to be addressed.

Oh no! giving PUF is not easy, to do this I would need to prepare myself extensively. I would need to take time off by busy schedule and focus on the positive behaviours these individuals have demonstrated throughout the year. I’m not sure I have the time during this very busy time of the year, to many things on my plate…I will just get them a bottle of wine or a box of chocolate or I will pay for the holiday lunch/dinner or I will get them a card wishing them and their family all the best….yup I will get them a delicious box of Belgium chocolate…..Done!

And who doesn’t love a delicious box of Belgium chocolate.

Receiving a box of Belgium chocolate is great, eating the first one is divine, having a second one is reasonable, having a third is acceptable because you deserve it, eating a forth one, we quickly realize we didn’t have too but we did and we quickly realize that we made a mistake and we might start feeling not so good.

So How impactful is that?

Receiving one of these so called ‘’normal’’ gifts is fun but once we have consumed that gift, it’s over.

But if instead, you decide that this year you are going to give them a PUF directly from your heart, how great would that be? How great will you feel when they look at you and mention: thank you for caring about me and giving me this great feedback.

This uplifting sensation you will feel should be addicting and it will certainly make you want to do it again.

So how does someone go about giving PUF?

And once you have shared your PUF

So how great is this simple holiday gift, little cost but very impactful.

And why not get them also a delicious box of Belgium chocolate. They deserve it too!

How many times in our life have we heard these statements; “I trust you” or “I don’t trust you’’. These statements are so powerful that one statement could truly empower someone and one statement has the potential of destroying someone’s confidence and self-esteem. Guess which one?

For confidentiality reasons, we will call him Mark.

Mark was an executive working for a top tier financial services firm. He was working for this firm for over 10 years. He was well appreciated by all and even seen as possibly as the next CEO. One day his current leader gave Mark the task to work on an important project. Like always Marc took on the task with a positive mindset and worked hard to complete it on time. While working on this project, Mark felt he needed to isolate himself to really stay focused and that is what he did. Once the project completed he called his leader to let them know it was done, his leader was very happy, mentioned to Mark to print a few copies and to bring it to their next board meeting.

The day the world changed for Mark

Mark and his leader arrived in the board room, all the board members were their, everyone was handed a copy of the presentation and everything seemed totally fine. Everything was fine until they realized that the financial information on the slides were incorrect. Mark’s leader was furious but held his emotions and comments until they were alone. When the meeting was adjourned, the leader took Mark aside and let him have it. What did he tell Mark? This is unacceptable and I can’t trust you anymore!

Let’s take a step back and let’s chat about Mark. Mark was working for this firm for over 10 years, he was appreciated by all and was considered an A player. But in a few seconds Mark’s world was destroyed. After that moment, Mark lost total confidence in himself and started questioning everything about himself; maybe I’m not that smart, maybe I’m not executive material. That questioning was so painful for him that he resigned.

So, who lost in this situation?

Everyone lost, the firm he was working for lost because they just lost a great A player and Mark lost also because he truly loved working for that firm.

How do we avoid facing this same situation?

To avoid facing this situation, you need to understand the four elements of trust.

The first element of trust is competency. When facing a difficult or challenging situation with a business partner or team member ask yourself the following question;

In Mark’s situation, it was not a question of competency because his leader knew that Mark was fully competent to do the job

The second element of trust is reliability. To evaluate someone’s reliability ask yourself these questions;

In Mark’s situation, it was not a question of reliability because his leader knew that the job would be done on time

The third element of trust is motive. To understand someone’s motive ask yourself these questions;

In Mark’s situation, it was not a question of motive because his leader knows Mark well and knows that Mark takes his job and tasks at heart.

The last element of trust is openness-quality of communication. To evaluate this last element, ask yourself these questions;

In Mark’s situation, this was the element that his leader was really questioning. The leader was frustrated, because he felt that Mark should of done a few spot checks with him while he was completing his presentation and maybe he could of caught the error. He also felt that if Mark didn’t isolate himself and instead asked for feedback while working on his project, errors could have been avoided.

So, what did Mark’s leader do?

He said the statement he should not have said; I don’t trust you!

If Mark’s leader had the opportunity to go back in time, with this new knowledge on trust, how should he handle this situation?

First, he should make Mark understand that he totally trusts his competency, reliability and motives. By telling him this, he is still making Mark feel good about himself after this devastating event. This is important because Mark is considered an A player and A players do make mistakes. One thing is for sure, we don’t want to lose an A player.

Secondly, he should mention to Mark that the element he is questioning is his openness and quality of communication. His leader needs to come well prepared with questions and concrete observations to address this issue.

And that is how he should handle it. Make Mark feel important and gave him great feedback to help him improve.

So instead of destroying someone’s confidence and self esteem, take the time to really learn these four elements of trust and make your coaching conversations truly positively impactful.

The world of a business leader and a sales executive often seems to be turning much quicker than that of the normal person. With so many deadlines and responsibilities, taking time to stop and reflect is often seen as an impossible task. The reality is that you need to stop. You need to take time to reflect. Your reflection time will help you plan, and planning will certainly help you to take action. I often hear business leaders and sales professionals mention how they are always moving and taking action, but the real question is whether they are always taking action on the most important tasks for their success? 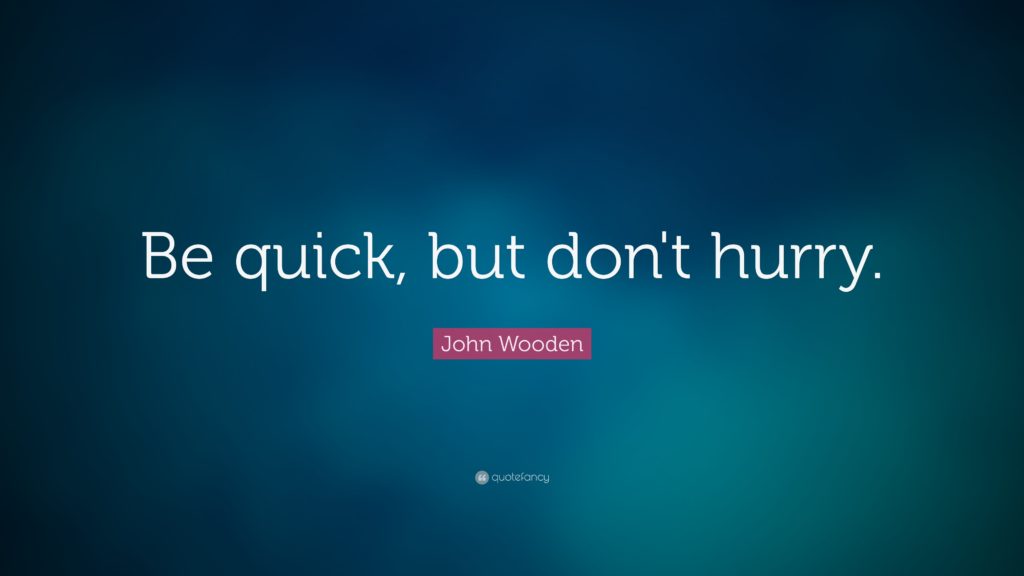 Like the great coach John Wooden said: “Be quick but don’t hurry”. If you aren’t quick in today’s world, you’re done. If you hurry, things are poorly done or not done at all.
So, at some point you need to stop. How is it possible to stop? Why and what should I stop for? What should I reflect on? I understand it’s not easy. As a business leader and sales professional, you are often managing many aspects of the organization, but if you want to be successful, you need to schedule time every week to Stop-Reflect-Plan and then Take Action. In the beginning, for the ones who have never done this, schedule 15 minutes in your busy calendar. If it does not show in your calendar, there is a high probability you will not do it. It is also very important for these 15 minutes to turn off your cell phone, your tablet, or any device which may compromise your thinking. I always recommend starting with a few minutes every week and then to slowly increase the reflective time to reach at least one hour per week. And for all those daredevils who want to jump right in and schedule one hour per week…, don’t do it! Remember the wise words from John Wooden: ‘’Be quick but don’t hurry’’.

To guide you with your topics during your reflective time, here are three important areas that a business leader, and a sales professional, need to stop and reflect on:

We all know that the success or downfall of our organization is directly linked to its leadership, so here are some questions you should reflect on:

Business acumen is also very important. Understanding how your company makes money is critical to effective strategy execution. Evaluating your product offering and the service you provide need to be considered regularly. Here are some questions you should reflect on:

As the leader and sales professional of your organization, you are certainly selling something, so having an optimal sales process is key to your growth. Here are some questions to reflect on:

Spending time considering these questions is essential. Once you have identified which areas need to be addressed, you need to ask yourself the following questions:

We often find ourselves in a situation where we don’t know who to contact for help. If you find yourself struggling to find someone or a firm that might help you, contact us. At L2L coaching our strategic partners team will certainly be able to help and guide you.

Scroll back to top